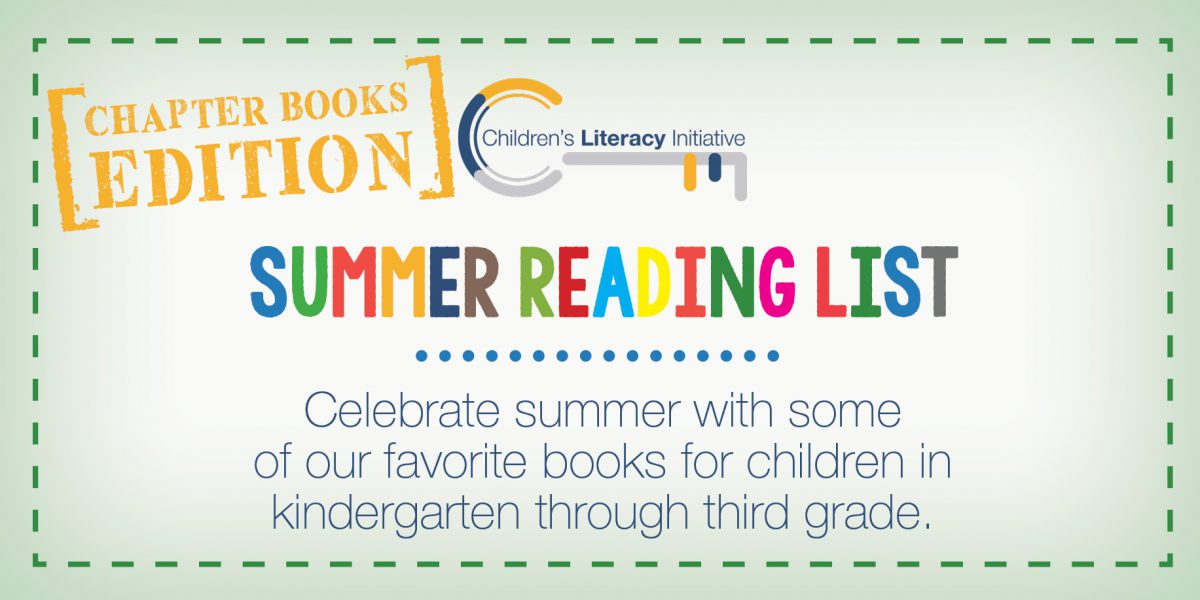 This summer is the perfect time of year to nurture the love of reading with books from our Summer Reading List. We’ve hand selected these incredible titles filled with adventure, mystery, and intrigued to keep your child reading all summer!

Who is Baby Monkey? He is a baby. He is a monkey. He has a job. He is Baby Monkey, Private Eye! Lost jewels? Missing pizza? Stolen spaceship? Baby Monkey can help…if he can put on his pants!
Baby Monkey’s adventures come to life in an exciting blend of picture book, beginning reader, and graphic novel. With pithy text and over 120 black and white drawings accented with red, it is ideal for sharing aloud and for emerging readers. Hooray for Baby Monkey!

The exuberant Barkus and his lucky young owner jump, whirl, and twirl across the pages of this critically celebrated series from a Newbery Medal–winning author. The straight-forward text is accessible for even the newest independent reader, while the warm, humorous story and vibrant, energetic images make this an ideal choice for picture book readers and advanced readers as well.

Jaden Toussaint, 5 year-old scientist and all around cool dude, has finally met his match. His cousin Muffin is every bit as epic as he is–maybe more! Will Jaden Toussaint keep his cool? Will life as we know it end as a result? Will anyone ever eat his Super Sneaky Seven Fruit Fruit Salad Muffins? Find out in Episode 3: Muffin Wars.Fans of Junie B. Jones, the Magic Tree House, Dan Gutman, and Franny K. Stein will love the Jaden Toussaint series of illustrated chapter books. They are hilarious and empowering for kids and grown-ups alike. Get your copy today.

When soft-hearted Travis discovers an abandoned baby skunk, he can’t help but bring him home and take care of him. Stinky, as Travis names him, settles in pretty well. But when Travis discovers Stinky’s litter-mate, Winky, who is in need of some help, things get complicated around the Tate house. One skunk is a piece of cake; two is just asking for trouble. Will Travis and Callie be able to keep the critters away from Mother’s careful eyes―and nose?
Don’t miss the next book in the Calpurnia Tate, Girl Vet series: Counting Sheep. And don’t forget the Calpurnia Tate books for middle-grade readers: The Evolution of Calpurnia Tate and The Curious World of Calpurnia Tate.

Someone’s stealing nuts from the forest, and it’s up to Detective Gordon to catch the thief! Unfortunately, solving this crime means standing in the snow and waiting for a long time…. If only he had an assistant–someone small, fast, and clever―to help solve this terrible case. A brilliant detective story by one of Sweden’s top children’s writers and illustrated in full color throughout. A book to read alone or aloud!

Louie and Ralphie Ratso’s dad, Big Lou, always says that there are two kinds of people: those who are tough and those who are soft. Louie and Ralphie are tough, tough, tough, just like Big Lou, and they’re going to prove it. But every time they try to show just how tough they are, the Ratso brothers end up accidentally doing good deeds instead. What’ll Big Lou do when he finds out they’ve been acting like softies all over the Big City? Perfect for emerging and reluctant readers, this clever and surprisingly warmhearted chapter book shows that being tough all the time can be really tough.

Juana and Lucas by Juana Medina

Juana loves many things — drawing, eating Brussels sprouts, living in Bogotá, Colombia, and especially her dog, Lucas, the best amigo ever. She does not love wearing her itchy school uniform, solving math problems, or going to dance class. And she especially does not love learning the English. Why is it so important to learn a language that makes so little sense? But when Juana’s abuelos tell her about a special trip they are planning—one that Juana will need to speak English to go on—Juana begins to wonder whether learning the English might be a good use of her time after all. Hilarious, energetic, and utterly relatable, Juana will win over los corazones — the hearts — of readers everywhere in her first adventure, presented by namesake Juana Medina.

It’s the third day of summer vacation, and Lark’s halmoni—that’s Korean for grandmother—has promised to take Lark and her twin brother, Connor, to the library. Only trouble is, they arrive to discover that the town librarian is missing her key to the library. Lucky for her, Lark just happens to be a budding private eye. Can rookie detectives Lark and Connor solve this mystery and recover the lost key?Lark Holds The Key is the first book in the Lark Ba detective series.

Fergus and Zeke by Kate Messner

Fergus loves being the class pet in Miss Maxwell’s classroom. He does everything the students do, until the teacher plans a field trip to the museum — without Fergus! He doesn’t want to miss the fun, so he stows away in a backpack and sets off for an adventure. When he arrives at the museum, Fergus finds it a little overwhelming — huge and full of exciting things to see. Luckily, he meets a new friend, Zeke, who knows the ropes, and together they explore everything from moon rocks to butterflies to a giant dinosaur skeleton (“A playground!” says Zeke). But when the time comes for the bus to leave, Fergus is worried that he’ll be left behind. Will he make it back to school to take his place as class pet once more?

Little Sofia Martinez has a big personality and big plans, which makes every day memorable. Between her sisters and cousins, her family is the focus of her many adventures. From taking school pictures to doing chores, this 7-year-old knows how to make every moment count. Sofia loves her family and loves her life. What could be better?

Are you interested in joining our team? We are hiring for various career opportunities across all our regions and remote locations. If you are committed to transforming education and ensuring that Black and Latinx children receive the high-quality & culturally sustaining literacy instruction they deserve, visit our careers page today.