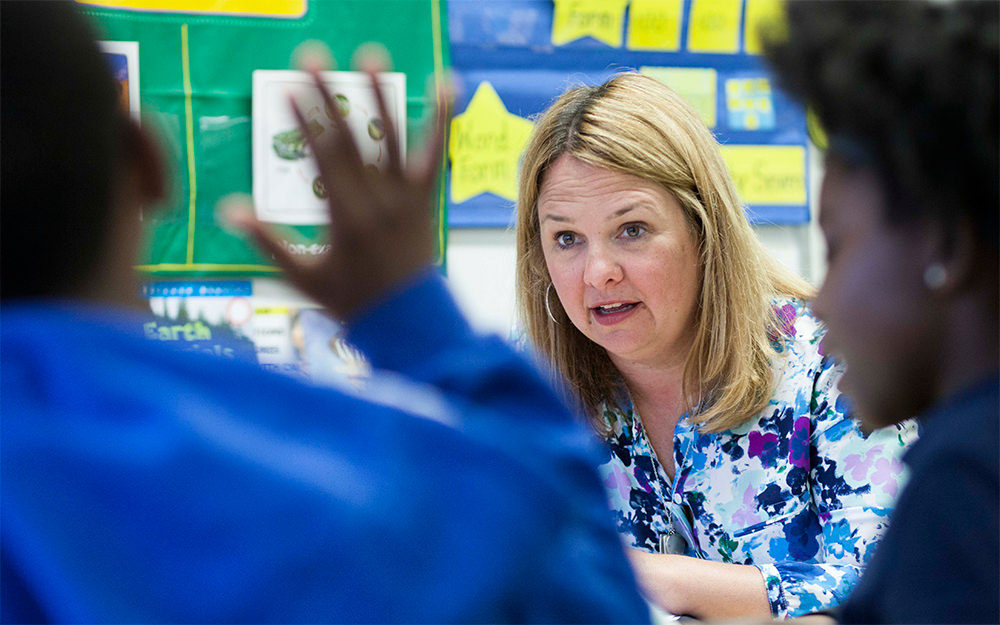 As teachers of young children, we all have encountered learning scenarios in which a child makes up a word. How do we effectively handle these teachable moments? We need to find a way to validate the child’s offering, without muddling the difference between words that are real and words that are not real in their impressionable minds.

We may be doing a phonological awareness activity, for instance, in which we ask the children to generate rhyming words. Imagine a ball toss game, where the teacher says a particular word, and then the children toss the ball to one another until everyone has had a turn to say a rhyming word. The teacher differentiates the instruction by supporting and scaffolding the children to better meet their individual needs. She has picture cards on hand to provide visual images of some common rhyming words in the “-all” family. For some kids, she gives a hint to help them come up with a word.

Even with such supportive teaching moves, children are still bound to come up with nonsense words from time to time. It is important to note a few things when this happens. If the child is meeting the goal, in this case generating a rhyming word, we certainly want to validate the child’s success. For example, in the ball toss game, let’s say the teacher’s initial word is “ball,” and the children begin to identify rhyming words, such as “call” and “tall,” until one child proudly announces, “jall.” The teacher may acknowledge, “Yes, those two words do sound the same at the end, so ‘jall’ does rhyme with ‘ball.’ Bravo!”

However, even though the nonsense word “jall” does in fact rhyme with “ball,” we do want to let children know that it is not actually a real word. Research on teaching English Language Learners (ELLs) indicates that as children are acquiring new vocabulary words and developing new language skills, we need to clarify the difference between real and unreal words. Since all young children are somewhere on the spectrum of learning the English language, we want to make this distinction clear for them. We can note this in a kind and simple way by stating that the made-up word is a “pretend,” “make-believe,” or “silly” word. Calling the word “nonsense” does not tend to hold meaning for young children; plus, it can have less sensitive connotations. On the other hand, a word like “silly” is more kid-friendly and developmentally appropriate.

Let’s consider another situation when a child comes up with a “silly” word in an activity where print is involved. Imagine a lesson where the teacher is helping children learn the letter-sound correspondence for “p” by reading a shared poem together.  A selected child finds the word “pig” in the poem.  At the teacher’s request, the child correctly identifies the first letter of “pig” as “p” but is only partially secure in making the sound /p/ that “p” makes. In order to help solidify the child’s learning, the teacher models saying the /p/ sound, and suggests “pet” as another word that begins with “p.” The teacher also jots down “pet” under “pig” on chart paper, starting a list of words that begin with the letter “p” and the /p/ sound. She strategically writes down the words because she wants the child (and other children) to connect the letter name, the letter in print, and the letter sound together.

When prompted by the teacher to come up with another word that begins with /p/ like “pig” and “pet,” the child says, “pim,” which is not a real word. As in the previous example, we want to acknowledge that the child has successfully met the objective, while distinguishing the word as made-up, so as to not cause confusion, especially for ELLs. In this case, the teacher might say, “Yes, ‘pim’ does begin with the /p/ sound. It begins with the letter ‘p’ just like ‘pig’ and ‘pet.’ “Pim” is a silly word so I’ll write the first letter ‘p’ to show that you knew the /p/ sound.” In this way, the teacher reinforces the teaching point, validates the student’s thinking, and seamlessly clarifies the difference between a real and an unreal word.

If the lesson were creating an anchor chart to be used as an ongoing resource in the literacy environment, the teacher might choose to visually distinguish between real and silly words, by creating two columns, or having a certain symbol (such as a goofy face)  next to the silly words instead of an illustration of their meaning.

Whether the lesson content is presented only orally or also in print, the important thing is that we be clear with children, especially ELLs, as they develop critical language skills and acquire a new vocabulary. Remember that we can be clear about real and unreal words in a kind and simple way, while remaining focused on the children’s learning goals and celebrating their successes.